A Fourier optics approach to evaluate the astrometric performance of MICADO

TLDR – The effect of wavefront errors on PSF quality is well understood. In this work I have investigated how the centroid location of the PSF shifts for different wavefront errors. Not only the low spatial frequency content of the wavefront errors, but also the mid-spatial frequencies affect the location of the centroid. Because the experienced WFE is a function of the footprint location on the optic, different field positions will experience different centroid shifts presenting itself as a form of geometric distortions. If not calibrated for, this can be a significant effect with respect to high accuracy astrometry.

Highly accurate (differential) astrometry is one of the primary science goals for the upcoming generation of large telescopes, such as ESO’s Extremely Large Telescope (ELT) or the Thirty Meter Telescope (TMT). An increase of the accuracy of relative star position up to an order of magnitude could be possible. In part this increase can be attributed to the increase in the aperture size of these telescopes, but another large part is due to the increasing understanding of the error sources relevant to astrometric observations.

The precise shape of the point spread function (PSF) and the geometric distortions of the image are two major components for accurate astrometry. Large scale image deformations, such as barrel or pincushion distortion, are an obvious detriment to angular distance measurements if not calibrated for. Similarly, a field varying PSF will affect the precise centroid location of a star on the detector. This effect is smaller than the error introduced by large scale geometric distortion. Nonetheless, these small variations might be important to get to micro arcsecond level astrometric accuracy.

One might then wonder how wavefront errors affect the PSF shape and in this way the astrometric performance of an astronomical instrument. This question is precisely what I’ve been looking into since my Master’s research project – but weren’t able to satisfactorily answer – and my current PhD project. Here I’ll explain what I’ve done to investigate this question by means of physical beam propagation in the form of Fourier optics.

Wavefront errors and the PSF

Using the expressions of the Angular Spectrum Method for Plane Waves and the Fresnel diffraction integral it is possible to calculate how a complex electric field propagates through an optical system. The lenses, mirrors, prisms and also the wavefront errors are introduced as a phase perturbation of the field at a desired point along the propagation direction. For example, if a glass surface is described by a profile

, then the new field after the phase perturbation is described by

Typically, wavefront errors are described using the Zernike polynomial representation. While these are very useful to describe low order shape errors of optics, the are not well suited to describe the mid- and high spatial frequency contents of a wavefront error. For this, a Power Spectral Density (PSD) curve is more useful. A PSD curve describes the power contained in the different spatial frequencies of a surface profile. However, because the PSD description is obtained by taking the modulus of the Fourier transformed surface profile we lose the phase information of that original profile. In effect, this means that a PSD description is not suited to describe non-random perturbations.
To generate our own WFE, we use a combination of both descriptions.

In the particular optical system of this work, we used an obscured Airy pattern to fit the PSF shape that was obtained. The location of the central peak, determined by

, was the parameter of interest. Specifically, we used 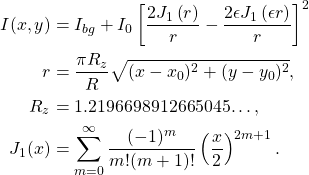 With this fitting routine, we were able to prove that not only the lowest spatial frequencies of a wavefront error, but also some of the mid spatial frequency contents played a appreciable role in the location of the PSF centroid.

To simulate this, we need to modify our simulations to allow for off-axis propagation. The analytic expressions of both the Fresnel diffraction integral and the Angular Spectrum Method for Plane Waves can be calculated over an infinite plane. Numerically, this is not possible due to finite computational time. Therefore, the field only just around the shifted PSF location should be computed. Applying the shift theorem to the propagation model provides a framework to do this efficiently.

The shift theorem states that a phase shift in the input plane translates to a spatial shift in the output plane, or the other way around. In mathematical terms,

Now, since the spatial shift will depend on the input field angles, a good argument can be made for using Ray Transfer Matrices (RTM) to calculate both the positions and the angles of a ray as it travels through the optical system. In fact, these matrices are precisely what is used in ray tracing software packages, such as Zemax OpticStudio and CODEV. Although my Master’s research project showed that ray tracing must be treated with caution with respect to these sensitive calculations, they are well suited to find the approximate location of the PSF. Then the more accurate physical optics calculations can take over.

Finally, we had all the tools to inspect how the PSF centroid location changes over the field. The optical system we used in the analyses was a simplified paraxial model of the ELT-MICADO system, where we were only interested in surface errors on the Atmospheric Dispersion Corrector (ADC) prisms. The ADC is located near the optical pupil, in collimated space. Therefore the overlap between the beam footprints for different field positions is large. Therefore we expected to see a significant correlation between the magnitude of the centroid shift and the field location. This is also what we found. The field variations were present with a magnitude of a few hundred micro arc seconds and the change over the field was smooth and continuous.

This result also showed that pre-observation calibrations will absolutely be necessary. The distortions found here are larger than the desired astrometric accuracy of several tens of micro arc seconds. The exact ADC configuration changes over time, making a distortion calibration critical to achieve the desired results.

At this point we’re considering whether or not to move the ADC during an observation. As said, the distortions change as the ADC rotates. The change in the distortions during an observation should be kept under control. Perhaps the easiest way to do this, would not to rotate the ADC at all during an astrometric observation. Of course, this then has impact on the dispersion correction performance of the ADC and should therefore be investigated in more detail.

This article was written to explain the motivation and reasoning for this SPIE conference paper. It is primarily intended to provide a bit of intuition to the work. For a more in-depth discussion, I’d refer the reader to the presentation and paper of the conference, linked at the top of the page.